Manchesterbeat
Celebrating the North-West's incredible 60s music scene
Contact us :
e-mail : This email address is being protected from spambots. You need JavaScript enabled to view it.
Location:
Manchesterbeat is located (quite oddly) in Bairnsdale, Victoria, Australia. If passing, please pop in for a cuppa!

The old Wooden Shack near the bus depot, top of Queens Road. I first started going here in '55. It was run as a dance school catering for all age groups. There were no groups then, only records.

The first part of the evening was taken up with group dancing lessons and then the later part of the night was free dance which introduced some jive, as rock and roll was just starting to enter the music scene.

I learnt to jive here and met my future wife here, after first having dated her younger sister. I also had my fist pints of beer at the pub round the corner on Cheetham Hill Rd. I believe it was called the Temple and served Cornbrooks beer.

I have many happy memories of Finigans, It was a time when I first started taking an interest in girls!!!

The Vincents played at 'FINNIGANS' on Wednesday February 19th 1964. Remember the audience being really great and going down a storm! It was a really great atmosphere and a very memorable night. Good memories.

Also remember the night of Herman's slang at one of the locals. Started going here in 63/64, had some great groups on and played all top hits, When House of Rising Sun came on it would soon clear floor as most people could not dance to the beat.

Even my kids went to dancing lessons here in 70s.

Finnegans was rough tough place and the Barn Dance, where the girls moved on to another partner, a good way to start a riot when boyfriends were around. Saw some of the best fights ever out side and inside the club. Forgotten the Temple till read this piece, good old fashioned drinking den. Happy days.

I played sax & clarinet for a gig at Finnigans in 1940, remember leavng during an air raid but no one panicked. I didn't know the group. Does anyone remember "The Holme" in Prestwich where I played with Les Vaugn during 1939 for a year or two before leaving to fly airplanes. By the way I still wear shorts during summer here in Australia and I'm well over 90! 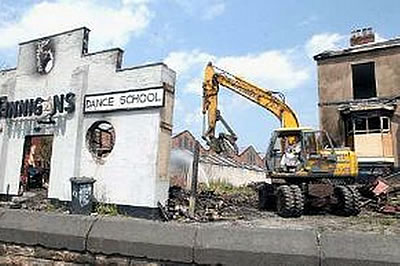 Copyright © manchesterbeat.com - All rights reserved. Rather than take our content without asking, please just ask.  If we can, we are pleased to assist.